Swastikas Amidst Pandemic in Reston
Votes

Swastikas Amidst Pandemic in Reston 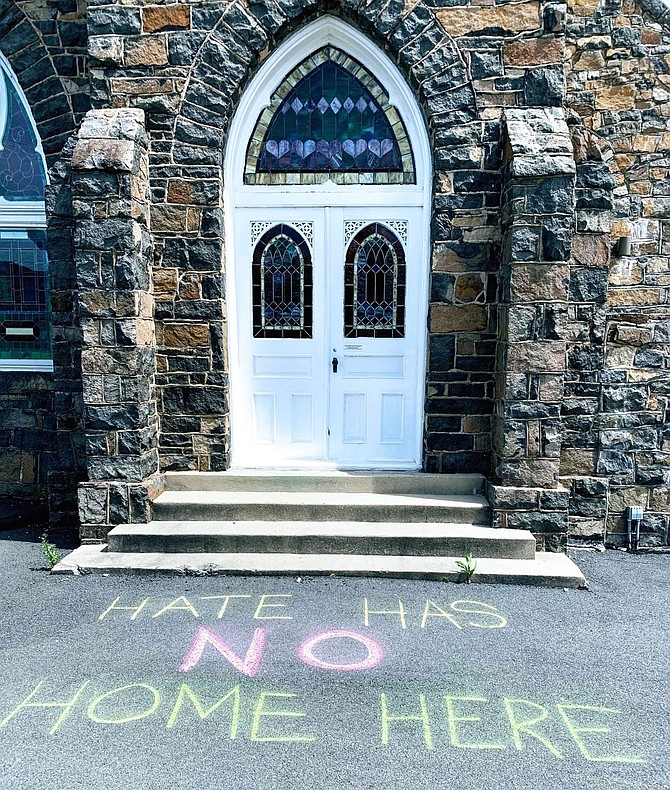 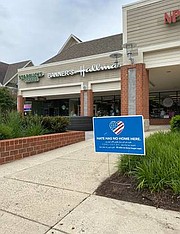 A HATE HAS NO HOME HERE sign is installed at the North Point Village Center in Reston, site of a recent graffiti of swastikas.

"Hate is contagious," said Rabbi Michael G. Holzman of Northern Virginia Hebrew Congregation in Reston. "We have to address it before it spreads.

According to Fairfax County Police, shortly after 6 a.m. on May 20, 2020, officers responded to the North Point Village Center in Reston, for a report of graffiti. They found several swastikas spray-painted on the sidewalk and nearby areas. The report called it a "bias incident." Swastikas, often called symbols of hate, are a sign of Nazi tyranny and intimidation. The Village Center is slightly less than two miles from Northern Virginia Hebrew Congregation.

"They (swastikas), along with zoombombers shouting the n-word or posting images of pornography, demonstrate the dark path that seduces too many of our fellow citizens during this pandemic," said Holzman in an email he sent to clergy and friends. He signed it, as did Cantor Susan Caro and Rabbi Jessica Wainer. "Whether one promotes the hatred of Jews, people of color or women, I believe these symbols are less shouts of fear and loathing and more whimpers of cowardice," said Holzman.

"We barely understand the scope of the virus and our economy is fragile, while our political leadership contributes to the sense of chaos," Holzman added. Leadership, he said, had been slow to respond to the upsurge in COVID cases. Two days after the swastika incident, in a briefing on Friday, May 22, Coronavirus Response Coordinator for the White House Coronavirus Task Force, Dr. Deborah Birx, said that nationwide, Washington D.C. and its suburbs, including Northern Virginia, where Reston and neighboring Herndon were located, had the highest rate of positive coronavirus tests in the country, hot spots.

"We are afraid, and the quickest analgesic is to project the fear onto an enemy. Our minds are wired to find a target when threatened, and the easiest target is some marginalized group in society. This eases our mental tension...until fear swells again within, and we seek another hit of mental relief in greater acts of villainization of the other. Hate is the opiate of a terrified society," said Holtzman.

Because of the pandemic and the stay-at-home order by Governor Ralph Northam, the Herndon-Reston clergy could not gather in person, but they could act electronically. "The moment calls for haste," Holzman said. He invited fellow all to take A Stand Against Cowardice, sign the statement available through an online link and release it with its long list of signatories. "This act of hate demands an especially loud response...As we were polarized before COVID-19, we should only expect a crescendo of these symbols, and we must turn them back before violent symbols become violent acts. We are already seeing attacks on retail workers who ask patrons to wear masks," he said.

Clergy from local churches, synagogues and mosques showed their support, as did laity and others. One by one, they stood in solidarity with their Jewish brothers and sisters and signed onto the "Call for Courage." "We are all afraid, and courage is the ability to face a fear and carry on despite it. Cowards allow fear to drive their decisions and actions, undermining one's duties and purpose. This pandemic requires unity of purpose, steadfastness, and sacrifice...We invite everyone to drown these cowardly messages with the message, "Hate has no Home Here." Write this on sidewalks, take photos, use the hashtag and post it online. Let us show Reston, Herndon, Vienna, Northern Virginia, the Commonwealth and Country that we go forward together," said Holzman.

Police classified the incidents as "Destruction of Property/Bias Incident." Anyone who has information can call the police non-emergency number at 703-691-2131.

The Herndon-Reston clergy have been meeting and building relationships for years, knowing that a crisis requires us to work together...Cowardice, denial and wishful thinking are just as dangerous in a country as they are if we hear a friend say, "Eh, it's probably nothing" when their fever starts to spike. I am proud of your words and honored to sign on. —Rebecca Messman, Co-Pastor, Trinity Presbyterian Church, Herndon

We are heartbroken to hear about this and our leadership has signed the letter. We have 20 "Hate Has No Home Here" signs to donate. —Tim Barwick, Minister of Outreach, St. Anne's Episcopal Church, Reston